Metric tapered roller bearings : The tapered roller bearing of metric size is a very common bearing component, which is widely used in mining machinery and gear boxes. Our products have been certified by TS16949. During production, each process is inspected, and the full inspection before delivery is carried out, so you can use our products with confi

single roller bearing is specially produced for the combination load. It can play a better role in the radial and axial direction.
Click Here

In addition to providing FINISH BEARING, we also provide turning and grinding bearing. We are the source factory.
Click Here

We provide a variety of inch and metric tapered roller bearings for different size.
Click Here

Taper roller bearings are designed to have inner ring ,outer rings, which are raceways to and formed by rollers. The imaginary cone, while the inner ring is also an important component.

These bearings can withstand radial and axial loads in one direction.

The taper roller bearings produced by us can meet the requirements of various precision applications in two sizes, layered sound quality and wages. Our design is mainly to help you achieve excellent precision requirements and control. 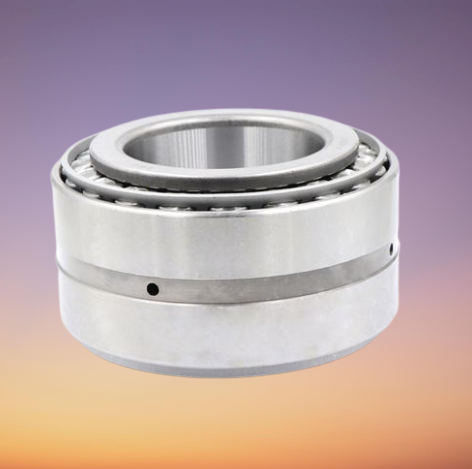 Long service life,
Low friction, low vibration and low noise.
It can operate reliably even under difficult conditions.
The temperature peak value decreases during the running in period.

Components can be interchanged and separated to facilitate installation, removal and maintenance.

Single row tapered roller bearings can be used back-to-back, face to face or in series, which can provide better advantages according to specific operating conditions. It can be used in combination applications in the process of complete use.

Double row tapered roller bearings are commonly used in lifting equipment, mining machinery and gear boxes, as well as in the processing of weight.

Roller Bearing, Taper
A particular kind of rolling element bearing is a taper roller bearing. It can withstand both axial and radial forces. For a wide range of applications, it is a great option. In industrial, automotive, and aerospace applications, these bearings are frequently used. They have a large load capacity in addition to having a high level of dependability and a long lifespan.

The inner ring, rollers, and cage are just a few of the parts that make up a tapered roller bearing. They come in single and double row designs and are frequently produced with detachable cone assemblies. These bearings have a special design that necessitates a thorough comprehension of it.

Taper roller bearings have an inner and an outer raceway that are tapered and are made to withstand axial and radial loads. The rollers are held together by a cage that fits between the inner and outer rings. Additionally, the high load capacity provided by this tapered design rivals that of spherical roller bearings.

There are several benefits to buying metric tapered roller bearings. They can carry an axial load, for starters. The second is that they have unique designations. They also come with the proper mounting dimensions.

Ability to carry an axial load
Tapered roller bearings have a larger load capacity than ball bearings. However, the contact angle of the rollers is primarily to blame for this. The bearing’s ability to support axial loads increases with increasing contact angle.

A bearing’s nominal contact angle ranges from 10 to 20 degrees. To boost the axial load carrying capability, a unique design might be used to raise the contact angle. The contact angle also shows how closely the rollers are pressed against the raceways. A performance element that is also used is the contact angle (a).
Metric tapered roller bearings
A straightforward calculation can be used to determine the bearing’s ability to support axial loads. The General Catalogue contains the equation. Even for bore diameters up to 85 mm, the calculation is still accurate. However, in urgent situations, more exact computations are advised. The revised formula can be used to calculate the maximum axial load that can be supported for a bigger bearing.

Typically, the minimum axial load is greater than the radial load rating. External forces, however, can also be more than the required axial load. Because of this, it’s critical to consider the load rating while selecting a bearing. Additionally, bearings that support a lot of radial load are also exposed to a lot of axial load.
Metric tapered roller bearings
The contact angle an affects the axial load carrying capacity of metric tapered roller bearings. The axial load carrying capability of the bearing increases with increasing contact angle. Reduced friction is also achieved by increasing the contact angle. The vertices of the cones that make up the rollers play a significant role in determining the contact angle a. The vertices of the outer raceway and the inner raceway are congruent with these vertices. The rollers will always be in contact with the raceways thanks to this. Additionally, this design enables the bearing to withstand moment loads.

Metric tapered roller bearings can have their axial load carrying capability raised through specific design. This is carried out to lessen stress rises at the roller contact’s edges. It also permits some angular misalignments. It guarantees the best possible stress distribution. For some bearings, the contact angle a can also be changed.
Metric tapered roller bearings
The metric tapered roller bearing basic designation system is divided into two parts: the first part defines the basic variant, and the second part specifies the series of bearings. A capital letter “C” or “J” precedes the three-digit number in the basic identification, which is followed by a digit or letters designating the dimension series.

Letters and numbers in the bearing series designate the bearing’s diameter and breadth. This name is frequently followed by a suffix that describes specific bearing characteristics including unique designs, materials, and configurations. The metric tapered roller bearing designation system is not entirely standardized because some manufacturers append a suffix to their designation.

The cone and cup are other names for the outer ring and the cages.

What are the characteristics of a tapered roller bearing?

Our tapered roller bearings are mainly tapered, which are composed of inner ring and outer ring, rollers and cages. This bearing structure can be said to have provide low friction during operation, At the same time, our products can stand the vibration test. We can customize according to the requirements of customers and specific conditions such as speed, temperature and vibration. Our tapered roller bearing solutions for applications that require improved performance, reduced friction, and increased power density.